Ooh - - I forgot..Southern California does have snow plows, instead of using them to remove snow, they are used to move sand when it rains like it did this past week. Quite an amazing thing to see!

Posted by Amy {Design Intervention} at 1:23 PM 2 comments Links to this post

Life with a 5 year old can be pretty entertaining. Yesterday when I was getting out of the shower there were pictures posted on the toilet for my enjoyment. When I asked Charise about them, she apparently thought I might need a reminder of what is supposed to take place at the toilet. Here are the pictures and their descriptions! 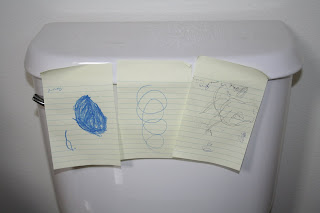 The toilet as it appeared when I got out of the shower. 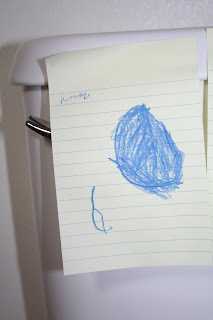 "This is a butt and some poopy" 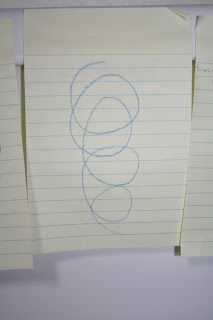 "This is the poopy getting flushed down the toilet" 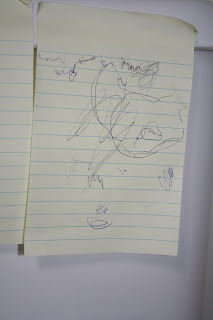 "This is where all the poopy ends up!"

Posted by Amy {Design Intervention} at 12:38 PM 3 comments Links to this post

We're not in Kansas any more...are we? 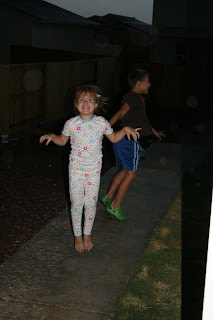 Dancing in the rain! 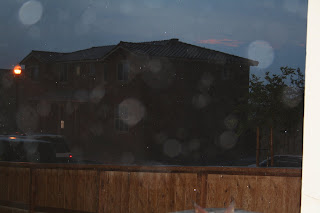 Before we lost power, doesn't really show how hard it was coming down. 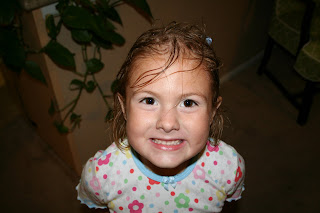 That was so much fun!!!
California has the craziest weather! I though CA was all about warm weather, oceans, beaches and palm trees....until you move to the desert! It has now rained 3 times in the year and a half that we have lived here. The third time being this week. Thursday night we were in the middle of a nice dinner with Jason's 1st SGT and supply SGT when out of nowhere masses of rain started falling. Now, most of you are thinking, what's so strange about that given the weather the midwest has been having. But we live in the desert, it never rains here and if it does, it is the lightest sprinkle (which we actually do count as rain) and it happens in the spring and fall -- not in July! Then, to top it all off we actually had thunder and lightning (haven't had that at all since I've been here). It was exciting! The kids were already in their pj ready for bed, but we had to let them go out and run around in the rain! The winds started blowing harder and suddenly we were without power. Without power around here is a big deal. No power = no air, no pool, no grocery store, no gas station... nothing! Now, normally I am a big fan of heat, that's one of the reasons why I love CA, but heat at 115 plus humidity (because of the rain) that's just unbearable! Jason's couldn't work because we had no phone, no internet, and no power, so we decided to pack up the family and go to town in search of buisnesses with air! But, with town being a 45 min. drive and our van on empty and everyone on post deciding that leaving was a good idea, we couldn't get gas (one gas station on post had en emergency generator, so it was open) everyone and their brother was trying to get gas. But, we are resourceful people and hopped in with our friends who were going to town! Turns out there was a TORNADO in Barstow (the nearest town). Eeks! I didn't think CA had tornadoes - it's all a part of the wierd weather this year. Earlier in the year there was an earthquake that went through Indiana (where we still own our house), then all of the flooding in Indiana (again right by our house) then tornadoes in CA? Seem wierd to anyone else?

Posted by Amy {Design Intervention} at 12:16 PM 1 comments Links to this post 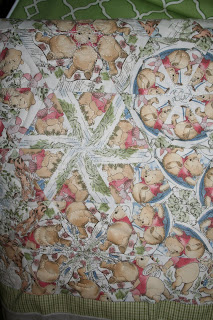 This is the quilt I am currently working on, it isn't finished yet, but it is so darn cute I couldn't wait until it was done to share the pictures! 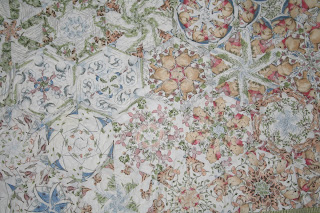 A bigger view of multiple block put together. 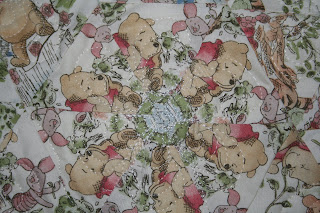 A close up of one block so you can see the detail!

Posted by Amy {Design Intervention} at 5:17 PM 1 comments Links to this post 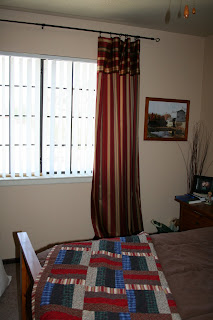 Curtains and a quilt that I made for my friend Donna 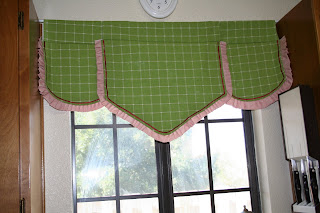 Curtains for one of my customers - - these ones are individual panels, so that when they have to move they can adjust the size by adding or taking away a panel 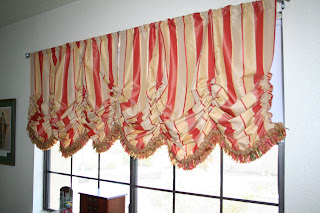 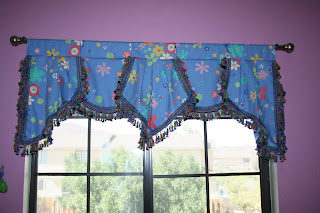 Bedroom curtains for a customers little girl, again these are individual panels for size adjustment.

Posted by Amy {Design Intervention} at 5:11 PM 0 comments Links to this post 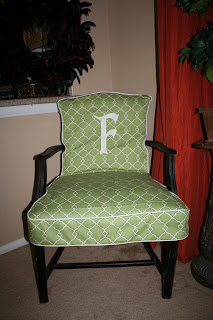 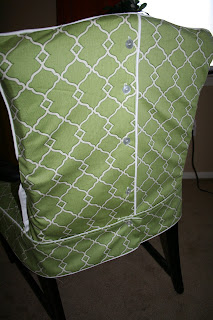 Here are a couple of pictures of the chair I made a slip cover for - - the picture of the back is so that my Mom can see that I can now do buttonholes successfully!

Posted by Amy {Design Intervention} at 5:08 PM 0 comments Links to this post

My sewing machine has smoke coming out of it, I think! Once a year they have what is called the "Care Fair" here on post. It is where everyone who has their own buisness and every organization on post has a booth and everyone can come out and see what Ft. Irwin has to offer. I am trying to put together my porfolio of everything I have done and also get together some samples for people to see and touch. I am working on the cutest quilt I think I have done yet... It is a kaleidoscope quilt made with Winnie the Pooh fabric, it is adorable. I am almost done with it and I will post a picture of the completed project. I have also made a slip cover for one of my chairs complete with button closures (my Mom should be proud of me for that!) it turned out fabulous. Hopefully everyone at the care fair will think everything is fabulous also!

As far as Franklin updates go... we went to church yesterday (finally) we have been traveling the last three weeks, so it has been awhile! The air was broken and it was HOT. Coming from me, someone who loves the desert, you have to know it was hot. People had told us that things were changing and that they had introduced new "upbeat" songs - - - they must have packed them away yesterday, because it was the same old drudgery made worse by the heat. People were actually leaving in the middle of the service.

The kids are enjoying the summer break, asking to go to the pool every day, which momma usually says yes to. They look like little CA kids, with their dark tans and sun bleached hair. Cameron is really turning into a little fish.

Well, I will try to post some pictures of my projects as soon as I finish them!

Posted by Amy {Design Intervention} at 9:19 AM 1 comments Links to this post 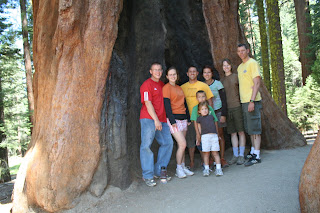 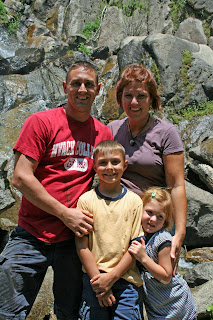 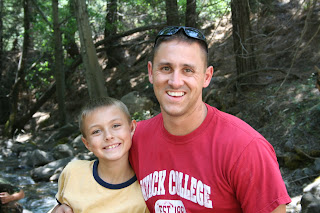 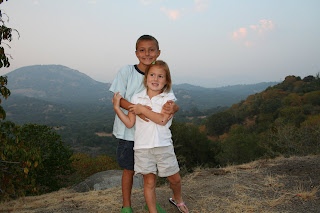 Well, we have been busy, busy, busy! We have been traveling the great state of CA. Since we have realized we only have one year left here and our list of places we want to visit is longer than the number of weekends in a year, we thought we better get started! Three weeks ago we went back down to San Diego and stayed on Coronado Island. It was awesome, beautiful and really relaxing! We also went to Sea World while we were there (had to get in our free day there!). Then two weeks ago we went to Los Angeles - - not so nice as San Diego. We went to Six Flags and the SanaMonica Beach. It just all seemed dirty and crowded to me. Last weekend we took off and went camping for the four day. We went to Sequoia National Forest and Kings Canyon. We had a blast. It was beautiful there and Very High! For someone who is afraid of heights, the roads were not very fun (something about being 6000 ft above sea level and looking over the edge of the road and seeing nothing but a sheer drop off just isn't fun for me! The kids loved it though, they have no fear! We climbed up Morrow Rock (7000 ft above sea level - - felt like 50,000 ft!) There we steps all the way up and a SMALL railing on the side, my kids ran right up, we had to keep telling them to wait up for us. I was a nervous wreck, but I do have to admit that once I got up there it was worth it, the view was beautiful! This weekend, we have decided to stay here (actually our check book has decided for us!) there is supposed to be a lazer light show on post, so I guess we will check that out and see what its all about. Not sure if it will feel like the 4th without fireworks. What, are they afraid that the sand is going to catch on fire here? Happy 4th to all and since I already forget once this morning, Happy Birthday to my wonderful Hubby!

Posted by Amy {Design Intervention} at 8:31 AM 1 comments Links to this post